In celebration of Her Majesty The Queen’s Platinum Jubilee, marking 70 years of service to the people of the United Kingdom, the Commonwealth and the Realms, a large number of special events are being held throughout the UK.

At Stanmore College, we too wanted to provide an opportunity for students and staff to also celebrate this major occasion and, as the Summer half-term break is week commencing 30 May, it was decided to hold our very own garden party on Wednesday 25th May from 12.00 to 2.00pm at the Elm Park site in the area between the Oak and Elm buildings. 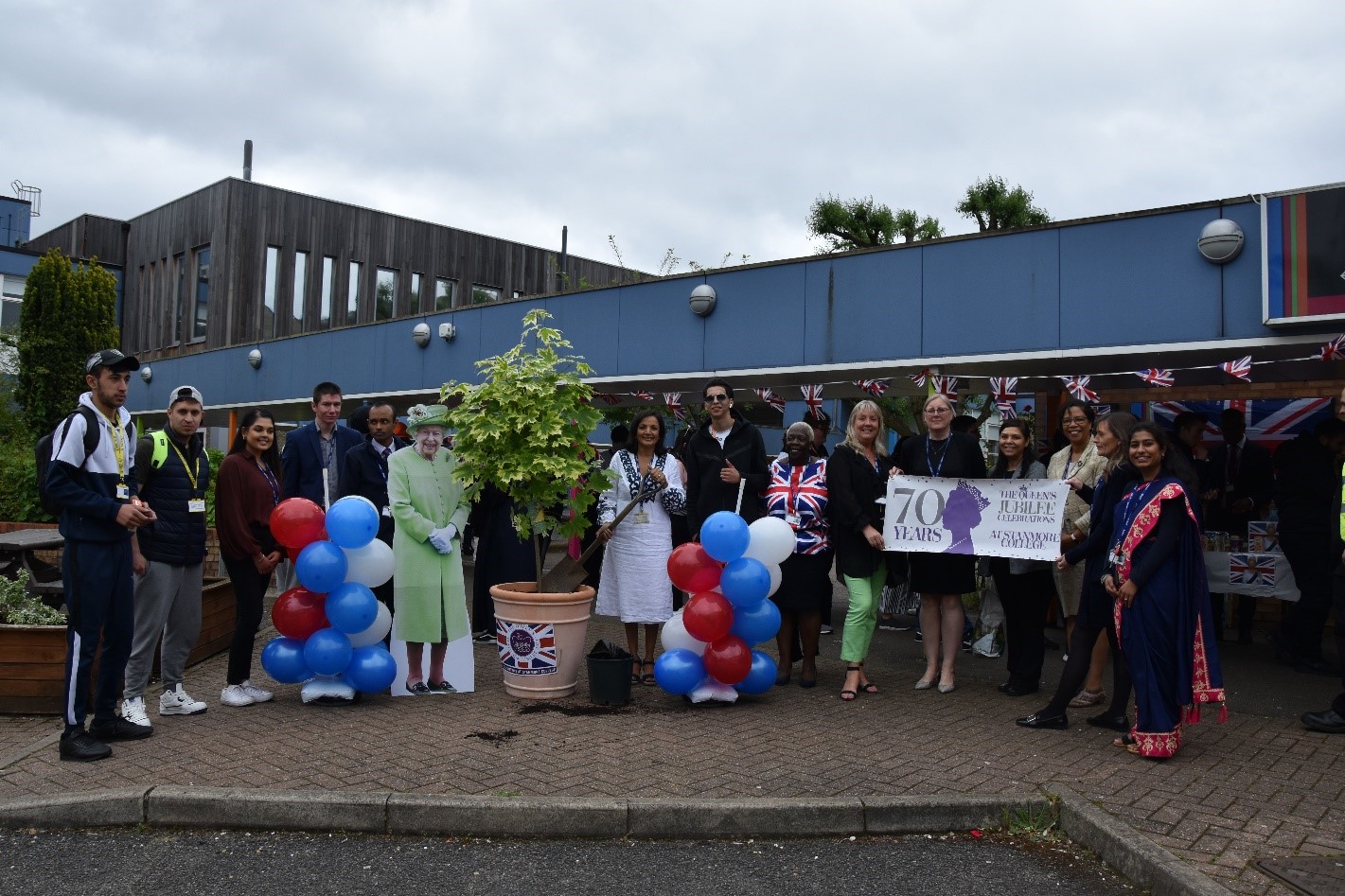 College’s Principal, Sarbdip, planted a tree in a large pot in line with ‘The Queen’s Green Canopy’ which is an initiative whereby a network of individual trees, avenues, copses and whole woodlands are being planed nationwide in honour of The Queen’s service and the legacy she has built. The idea is to create a green legacy with every tree planted bringing benefits to the climate, wildlife, society for the future. 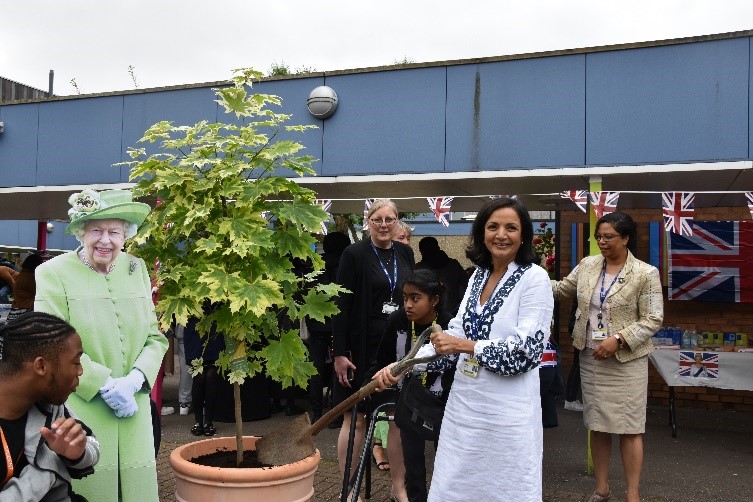 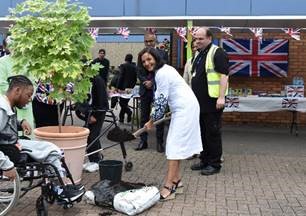 While we are aware that Her Majesty’s favourite tree is a Verdon Oak, an Acer Platanoides Drummondii boasting green lobed leaves with a cream variegated margin was chosen for Stanmore College and it was planted in a large pot due to planned building works. We are confident that our ‘green fingered’ staff will ensure it is watered regularly until such time as it is replanted on the College site. 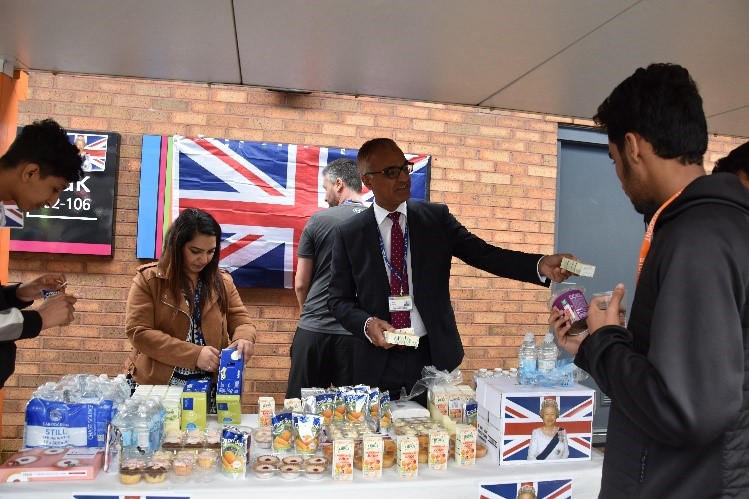 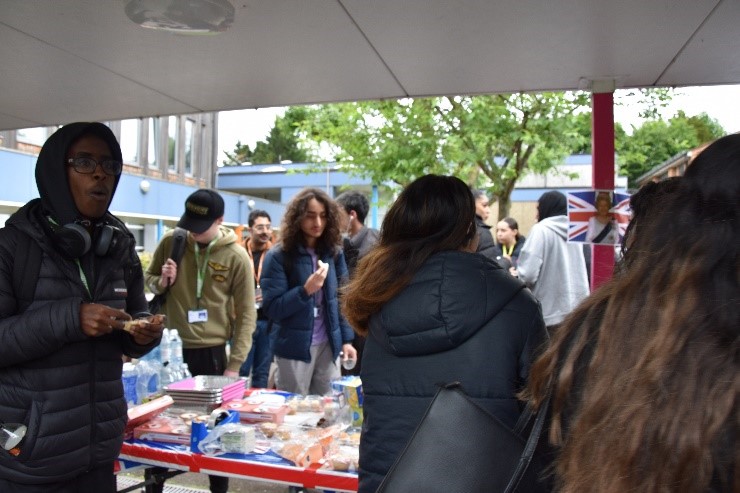 Free light refreshments, cakes and snacks were provided for all who wished to attend (students and staff) during their lunch period not forgetting those who require vegan or gluten free refreshments - a separate table of provision was available for those with dietary requirements.

The students were really pleased and said they liked the wide range of cakes and drinks, the background music contributing to the bubbly atmosphere, and the friendliness of all present. Deputy Principal, Bob Pattni, joined the Admissions staff in welcoming and offering refreshments and bites to everyone there. 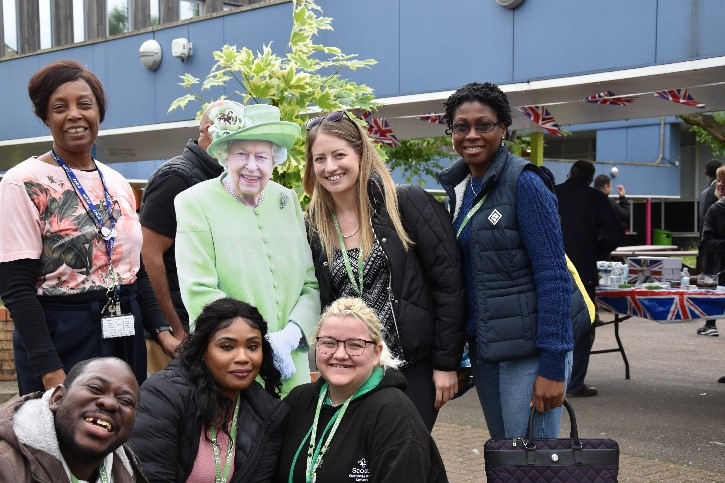 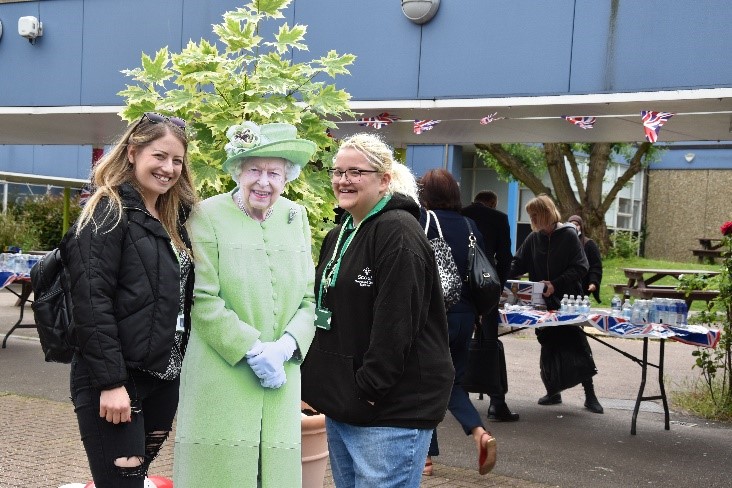 Many attendees wore traditional clothing in celebration of the Jubilee, the Commonwealth and their respective countries and laughter and smiles abounded as they patiently awaited their turns to have photographs taken with Her Royal Highness. 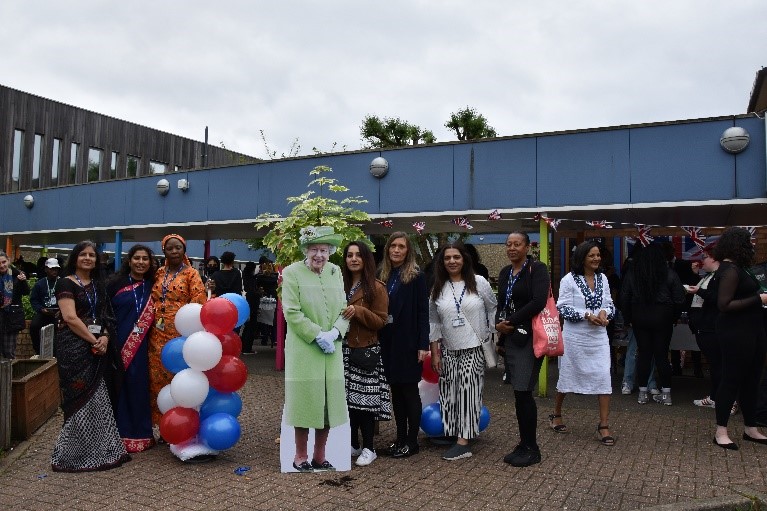 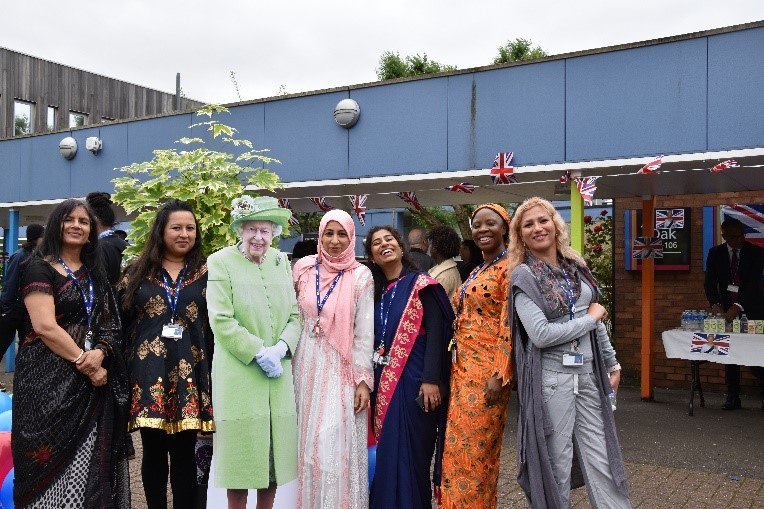 In return for the opportunities to have photographs taken alongside our replica, there was an opportunity to give donations towards charity for those who wished to do so. Of course, no individual was denied the opportunity regardless. 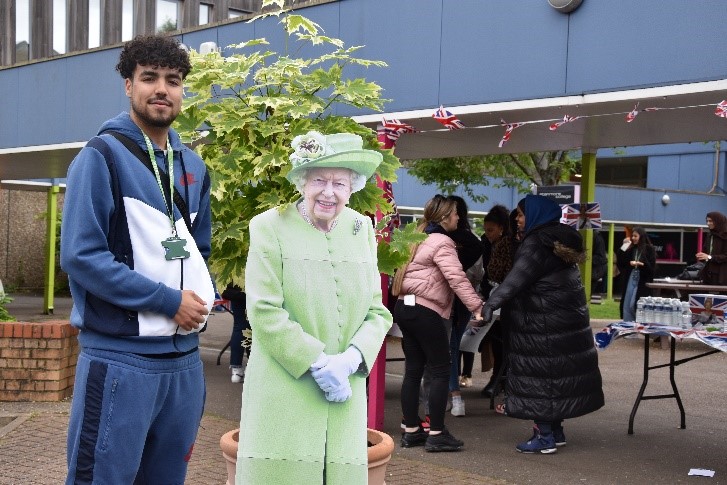 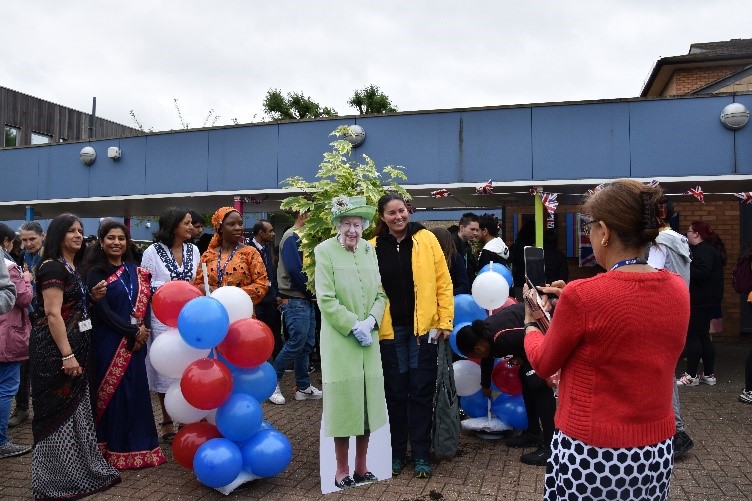 Comments from students included “It was neatly organised and the cakes were yummy. Lovely atmosphere. I enjoyed it” - Alex Hooper, Access to Computing student. 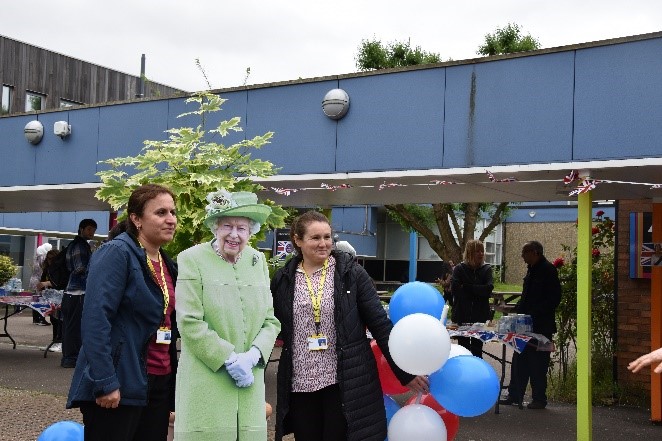 Hima Shah, Job Centre Coach, who is based at our on-site Youth Hub commented…

”I just wanted to say that it was wonderful to see many students and staff who had taken part in Platinum Jubilee Celebrations here at Stanmore College.  The atmosphere was lively and everyone was eager to get a photo with her Majesty.  Despite the weather, the majority of the students and staff attended this event and loved the theme of vibrant colours – red, blue & white to represent Royalty.  Also, it was nice to see them planting a tree to honour Her Majesty’s Jubilee.  Thanks to those who were involved in making this event possible and success and it also managed to get people to unite.  It is nice to see the organisation making an effort to mark this special occasion and it gets the community together”’

“We at Student Services had a great time dressing up in traditional clothes and getting our pictures taken with the Queen (cut-out). It was a great opportunity to come together as Stanmore College community and celebrate British Values in a true sense.”

Liza Ayoub, Health and Social Care student voiced “everyone was joyful, and it was a positive vibe, there were lots of staff members that I have never seen before, everyone was really happy”.

Another student who wished to remain anonymous said “It was nice, got a free drink”

Shelley Thomas, Student Services Administrator commented “I personally thought that it was a lovely social gathering, lovely cakes and the cut-out of the Queen was a great talking point. It feels like a long time since we had a gathering, so was a positive event.”

Deborah Parkes, Lecturer in English, reported “my students had not known what the event was about”.  As such this was a great way to inform our students who were still unaware despite information displayed and referred to of a little bit of positive history in the making. 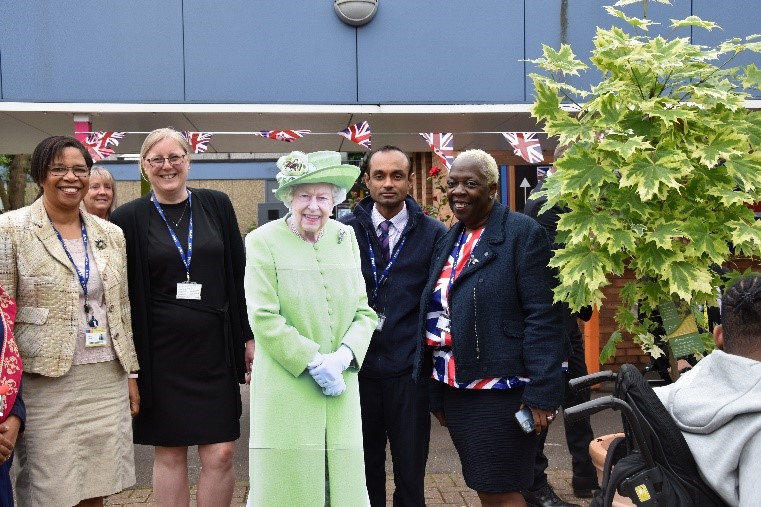 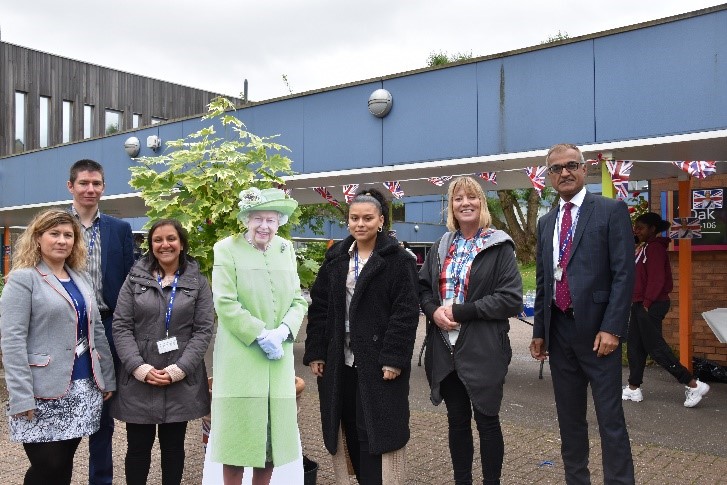 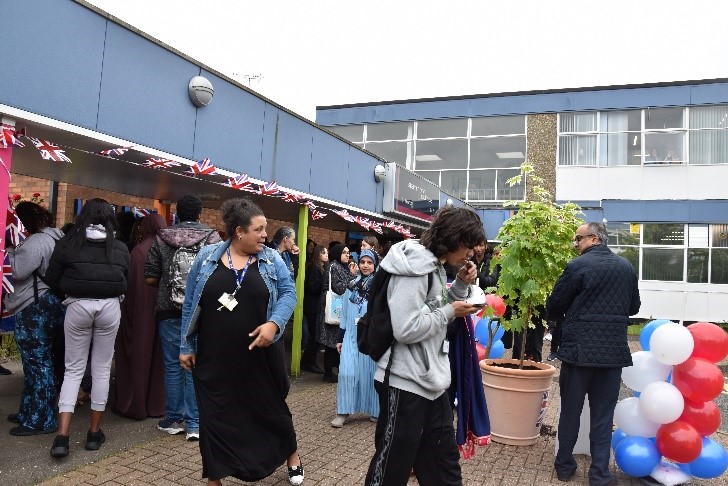 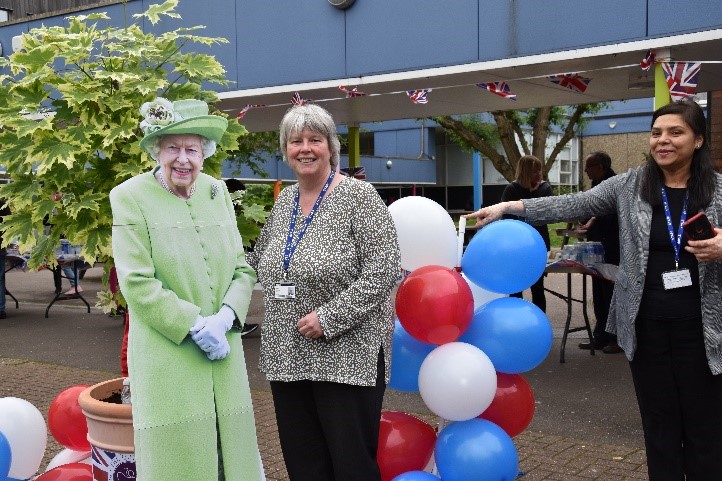 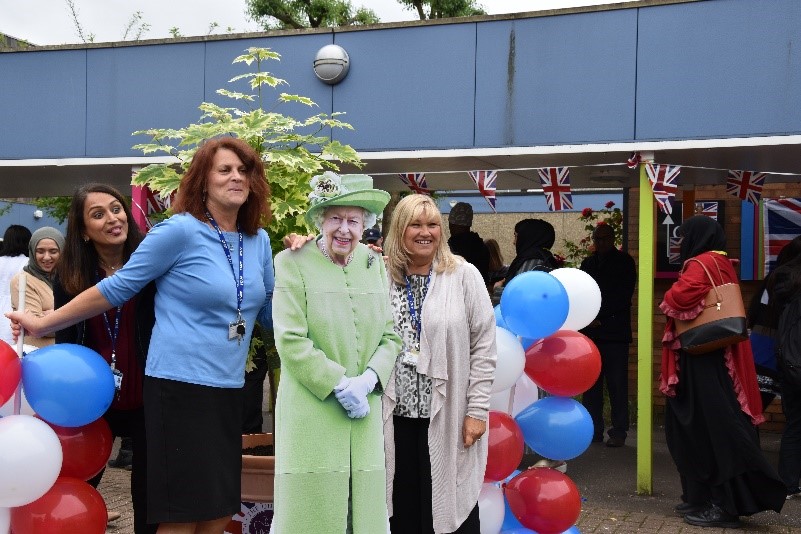 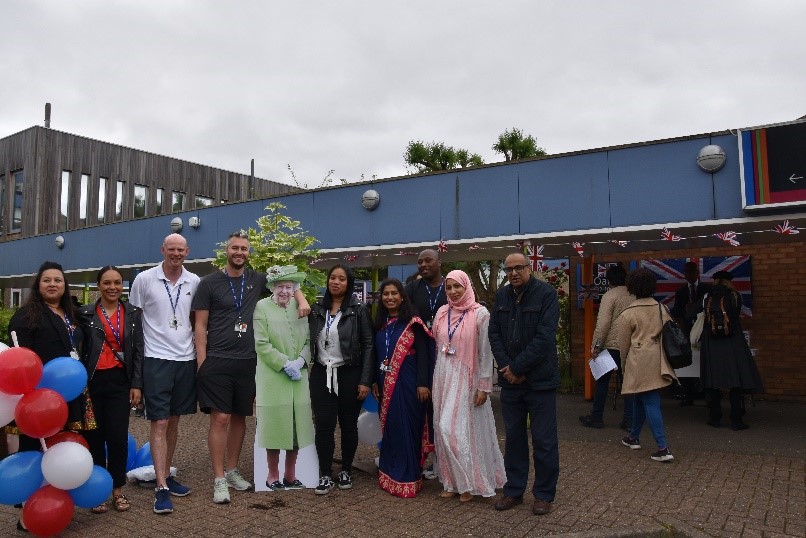 We wish everyone a very happy long Jubilee weekend and perhaps, many of you will be attending yet more garden or street parties over the coming week!