The trip started on Monday 30th May for 15 Stanmore College students across Business, Creative Arts and Media, Science, Accounting and Engineering accompanied by 3 teaching staff. The exhilarated group embarked on their journey via Eurostar from London Kings Cross to Lille, from where a coach awaited to take them onwards to Douai, Harrow’s Twin Town in Northern France.

Having settled in at the hotel, the enthusiastic group attended an Opening Ceremony with Frederic Chereau, Mayor of Douai, at Douai Town Hall in the presence of several French councillors and officials. Attendees included a representative of Maison D’ Europe and local students from a similar educational establishment, Lycée Rabelais School, based in Douai.

Lycée Rabelais School hosted the week-long visit schedule for the mornings of Tuesday to Friday with afternoons being held for leisure. Experiences at the school included an activity on setting up a business and associated budgeting and a French cultural quiz. French hospitality students delivered a presentation on what they had covered in their course; in return Stanmore College’s students presented on their respective courses. The students enjoyed a jewellery making workshop and revelled at their final products which included bracelets, necklaces, and earrings which they got to keep! They also had the opportunity to use ‘Pix’ software to develop I.T. applications.

Our French counterparts treated Stanmore students and staff to a presentation on the fascinating history of Douai; in 1667 Louis XIV captured the town, which had been ruled successively by the counts of Flanders and the dukes of Burgundy, Austria, and then the Spanish Netherlands. It was ceded to France the following year in 1668 by the Treaty of Aix-la-Chapelle.

Stanmore College students undertook a first aid course delivered in French with translators on hand after which they were presented with certificates of achievement.

Friday morning saw their pent-up energy released by participation in a French organised treasure hunt in a large park followed by prizes for the winners. 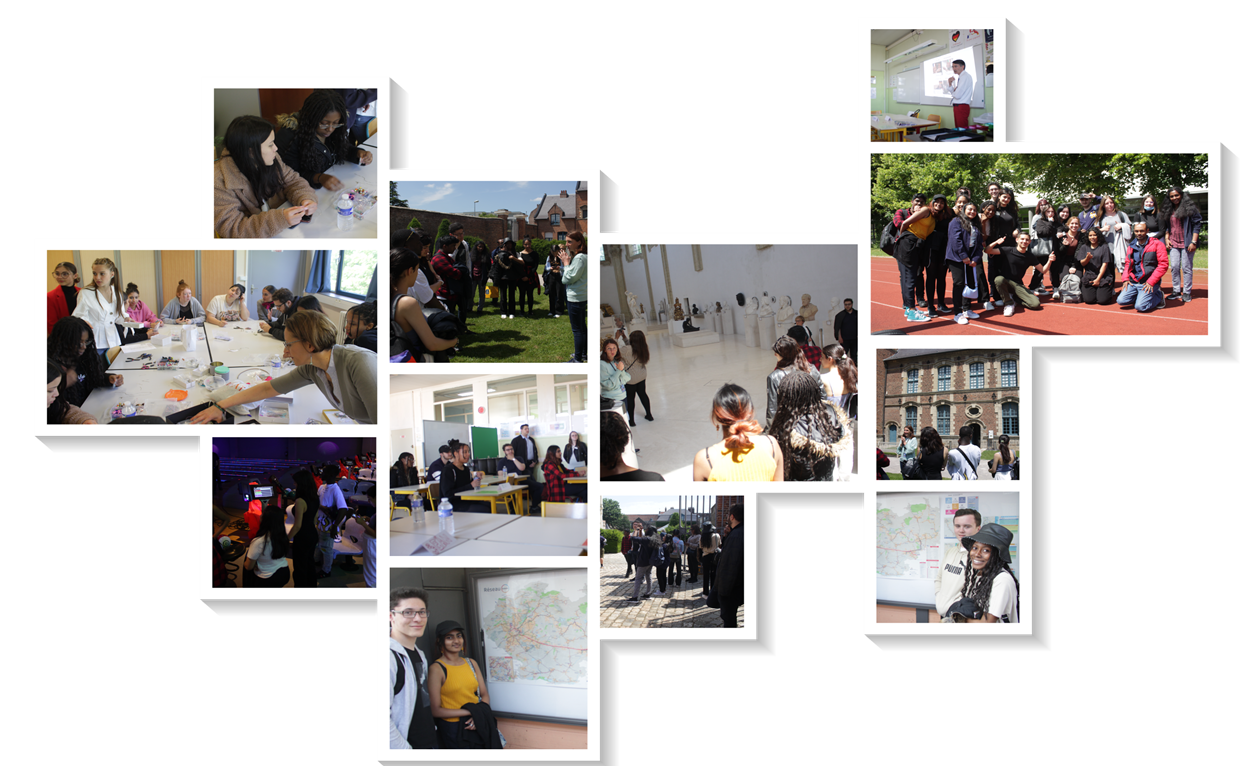 Leisurely afternoon activities included a European Union financed guided archaeological tour of our ‘Twin Town’. This was followed by a visit to a library with opportunities for competitive games and activities and a trip to an impressive Museum called ‘Musee de la Chartreuse’ and French courts.

Students seized the opportunity to visit Lille where they appreciated its large shopping centre ‘EuroLille’ after which they savoured dinner a la carte!

A visit and guided tour of the UNESCO heritage site, The Belfry of Douai, was a source of great enjoyment after which the group took pleasure in a trip to a reclaimed working farm, which had formerly been an active colliery. Exclamations could be heard as Stanmore College’s urban students milked cows and tasted freshly made goats’ cheese and milk, all under the capable watch of Mr Yves Piquot, city councillor and biodiversity specialist. Further leisurely activities included bowling, snooker and playing electronic games.

Stanmore Student, Abdullah told us ‘if I ever got an opportunity to go back again, I definitely would’.

In thanks, Stanmore College presented a British Glass Charms set and a historic London map to the Principal, Mme Silvana Butera and Deputy Principal, Mme Sophie Urbaniak, of Lycée Rabelais School and a similar gift was also presented to the Deputy Mayor, Nathalie Apers, after Friday’s final lunch at the School.

Mme Silvana Butera and Mme Sophie Urbaniak presented the Stanmore College group with a hamper containing an array of French traditional foods and crockery coloured blue for France and red for poppies as a parting gift.

Andrei, another of Stanmore College students present recounted ‘I learned French, enjoyed the historic city tour, the Museum, the farm and the activities’. 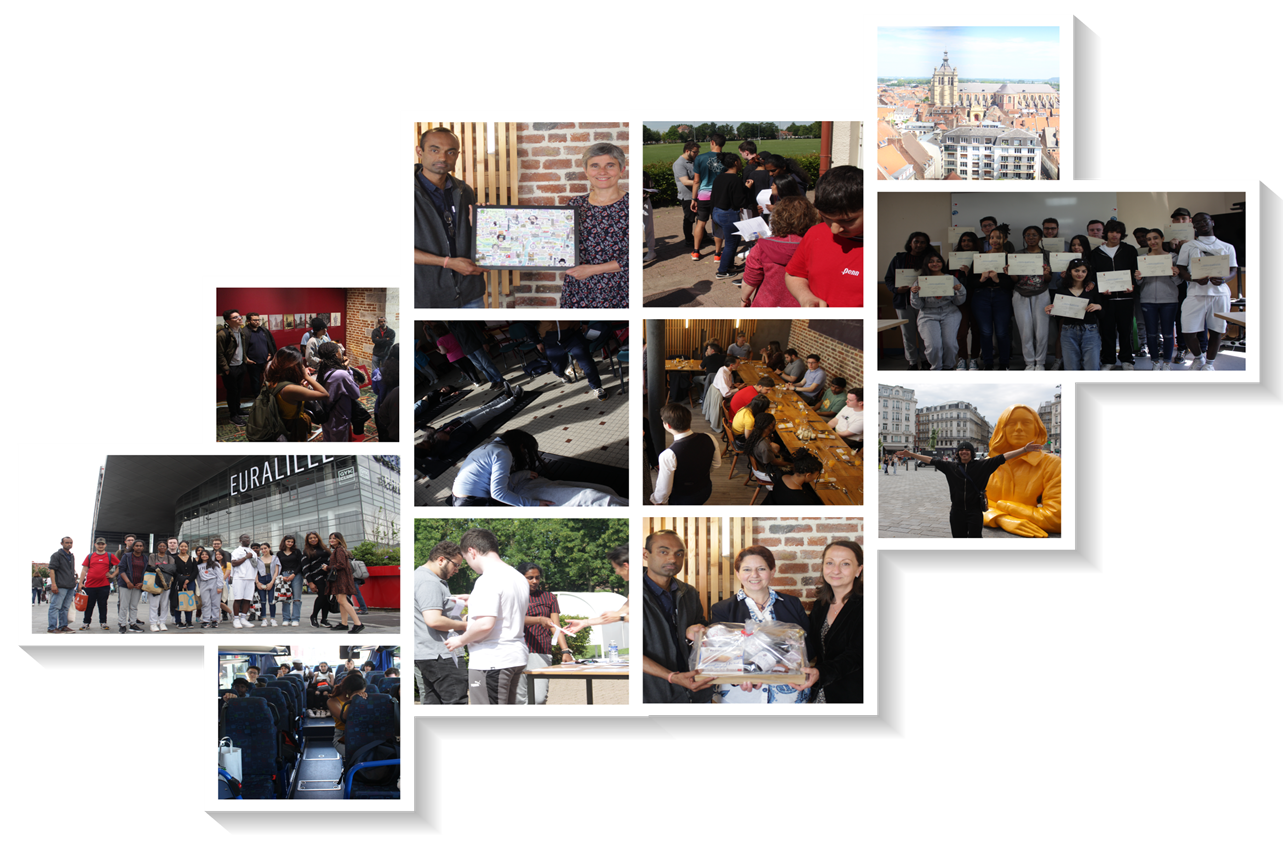 All the Stanmore students and staff conveyed their strong appreciation to the officials from Douai Town Hall and the staff and students from Lycée Rabelais school before bidding farewell and setting off on their return to the U.K. Their French counterparts had been incredibly welcoming and helpful with numerous French students, and in the region of eighteen French teachers, taking time to contribute towards making the trip an enriching experience.

Stanmore College’s Head of the School of STEM (Science, Technology, Engineering and Maths), Vik Seeborun, commented ‘This was a once in a lifetime hugely educational opportunity. It enhanced our students’ life experiences and understanding of the French culture and people. The students from Stanmore College and Lycée Rabelais School worked together collaboratively and this will remain a positive memory for all as they embark on their future pathways.’

This exceptional trip was sponsored by The Turing Scheme, a UK government programme to provide funding for international opportunities in education and training across the world.

The College is grateful not only to counterparts in France but also to John Hinckley, Councillor Jean Lammiman, College Governor, and staff who saw it to fruition.