Dr Ajay Kaushik dedicated some of his valuable time to meet and deliver a face-to-face presentation to Stanmore College’s I.T. students on ‘A Real Time Intrusion Detection System for Bio-Medical and Cyber Physical Systems.’

Dr Kaushik introduced these complex concepts by first asking the students how, in addition to getting good grades from their college study programme, they intend to stand out from the competition when it comes to securing a good job or university place. The question was certainly food for thought and the students were relieved to hear the answer which was ‘research – any experience you can get will help you to get ahead’. There was no doubt that those who focussed on research and experience could get ahead.

In response to a question on whether the students had heard of cyber security encryption techniques, it was evident that they had, but did they know the seriousness and status of encryption worldwide? Perhaps not. And that is exactly why specialists like Dr Kaushnik can contribute over an above to those studying these subjects.  In today’s world of electronics emails need to be encrypted as do mobile phones, computers and so on; data is valuable, just as valuable as money and no-one would want their bank details falling into the wrong hand – encryption techniques are therefore used in a wide variety of communications for day-to-day life.

He elaborated by informing attendees that, until 1999, this was done by DES (Data Encryption Services), however since then AES (Advanced Encryption Standards) have superseded DBS. Most online material in today’s world is AES encrypted. BUT there are new computers systems called Quantum Computers in the pipeline and these incredibly fast computers are expected to be available on the market in just 2 to 3 years. Most concerning is that these Quantum Computers could break AES. So, what will happen to our Facebook, Instagram, and Bank accounts? Here lies a major problem and where there is a problem there is a research opportunity. As the existing security will not work, what can be done to safeguard data? 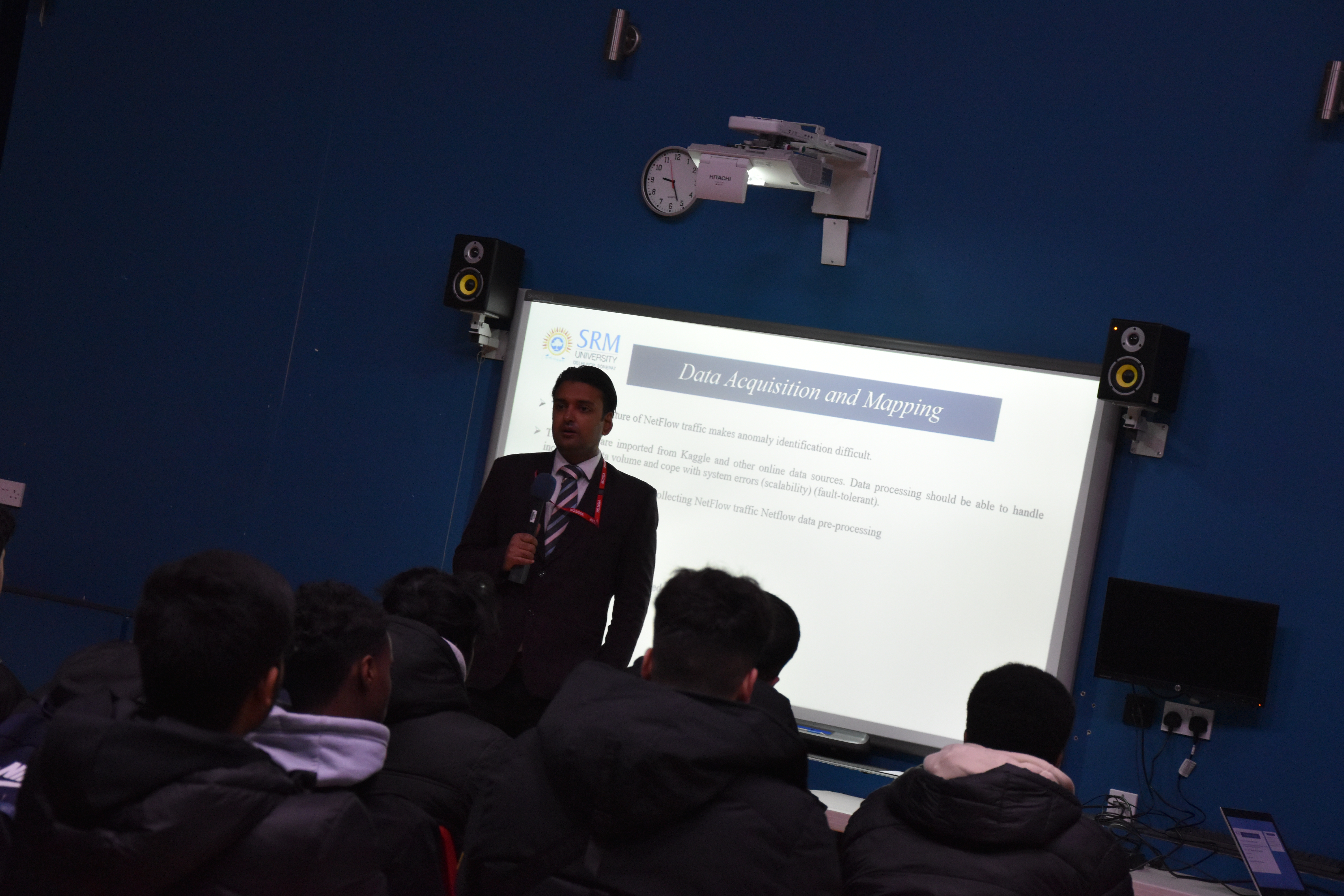 Students’ suggestions included making a copy of data, but this would simply mean an individual would retain a copy, not that it would be protected from getting in the wrong hands. All agreed that it was imperative that the encryption was made unbreakable even on these dynamic new Quantum Computers. As such, this was put out to tender worldwide 6 years ago and proposals for solutions were invited from all around the world. Even now, proposals are still being accepted. A decision is still being made as to which proposal can withstand quantum.

Latency (delay) following an intrusion or security breach needs to be addressed immediately and this can be done by using AI (Artificial Intelligence) in which you would train your system about the kind of attacks that could occur, and that system subsequently can tell you when something is being attacked. This can be done using sensors not dissimilar from those that keep lift doors open or beep when cars are reversing.

Cyber security is a booming research area in today’s world. Students were invited to learn from Dr Kaushik and, should they wish, work with him to establish ideas on NISD (the Network of Information Systems Directive) compliance to shape the future of the digital world and boost the overall level of cybersecurity by facilitating cooperation and exchange of information to further improve resilience and response capacities and protect critical infrastructures.

If you are interested in cutting edge technology and contributing towards solving problems such as these, check out our I.T. study programmes at www.stanmore.ac.uk